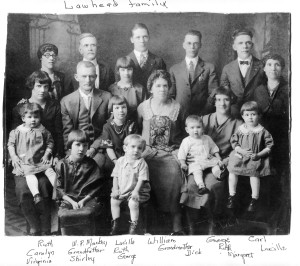 The Lawhead family during the late 20's

It’s interesting to note that the two oldest ancestors for my mother were both named William, and even though William Mackey (b 1760) was born 12 years earlier than William Laughead (b 1772), the Mackey line goes back one less generation. This is primarily explained by that fact that great grandfather William Patterson Mackey was 53 when his daughter Martha Ruth (Nonnie) was born. He and I never met since he died in 1945, the year before I was born.